This is a copy of a webpage.
My commentary in bold.

As World Turns it Drags Time and Space

An international team of NASA and university researchers has dramatically improved the accuracy of the first direct evidence that the Earth drags space and time around itself as it rotates. The measurements used the latest gravity models obtained from NASA's GRACE mission. 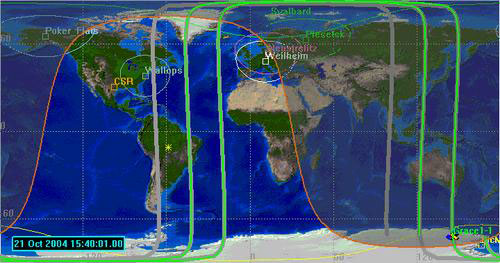 Image above: The Grace Satellite's Orbit - This image shows the orbit track of the twin GRACE satellites. In one month its track will densely cover the entire globe. The shaded part of the image is night time. The un-shaded is daytime. The names on the image are ground stations from where scientists talk to the satellite. Credit: Univ. of Texas, GRACE Science Data System.

The researchers first measured the "Lense-Thirring Effect," predicted in 1918 using Einstein's theory of general relativity, in 1998 by precisely observing shifts in the orbits of two Earth-orbiting laser-ranging satellites. The team used additional observations of the same satellites, combined with a more accurate model of the Earth's gravity field, to yield the new measurement of the Lense-Thirring Effect.

The team was led by Dr. Ignazio Ciufolini of the University of Lecce, Italy, and Dr. Erricos C. Pavlis of the Joint Center for Earth System Technology, a research collaboration between NASA's Goddard Space Flight Center, Greenbelt, Md., and the University of Maryland Baltimore County.

"Our measurement agrees 99 percent with what is predicted by general relativity, which is within our margin of error of plus or minus five percent," said Pavlis. "This is a significant improvement over our 1998 measurement, which had an error margin of plus or minus 20 percent using the best gravitational model available at the time." 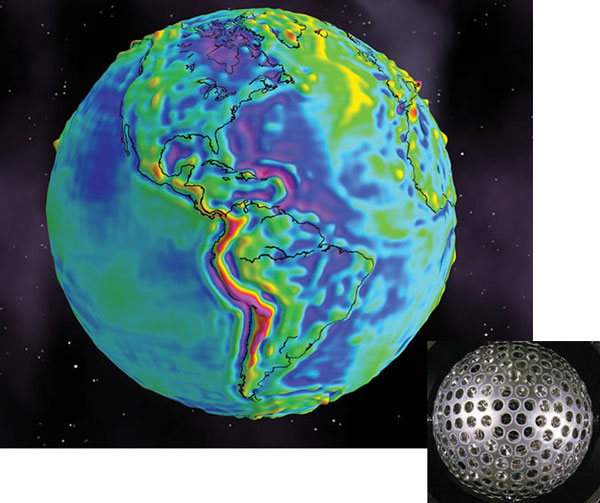 Image above: Gravity's Complex Picture and Lageos Satellite - The relief indicates the deviation of the true gravitational field from that of a perfect spheroid with uniform mass distribution. Red is higher deviation, blue is lower deviation. INSET: The LAGEOS satellite provided the data to test the Einstein theory. The GRACE mission provided the underlying gravitational data. Click on image to enlarge. Credit: Artwork by F. Ricci (Univ. of Roma, "La Sapienza") and I. Ciufolini (Univ. of Lecce), Earth model courtesy of GFZ-Potsdam, Germany.

The researchers observed the orbits of the Laser Geodynamics Satellite I (LAGEOS I), a NASA spacecraft, and LAGEOS II, a joint NASA/Italian Space Agency (ASI) spacecraft. The research, reported in the journal Nature, is the most accurate direct measurement to date of the Lense-Thirring Effect--a bizarre effect of general relativity, which predicts a rotating mass will drag space around it. The Lense-Thirring Effect is also known as frame dragging. Frame dragging is like what happens if a bowling ball spins in a thick fluid such as molasses. As the ball spins, it pulls the molasses around itself. Anything stuck in the molasses will also move around the ball.

Similarly, as the Earth rotates, it pulls space-time in its vicinity around itself. This will shift the orbits of satellites near Earth. The measurement is extremely challenging to make because other factors, like changes in the density of the Earth's upper atmosphere, have a much greater effect on satellite orbits than the Lense-Thirring Effect. Additionally, the Earth's gravitational field is not uniform. For example, the mass of a mountain range can tug on a satellite, slightly altering its orbit. The previous measurement was much less accurate than the current work, due to inaccuracies in the gravitational model available at the time.

Image above: ILRS Network Map - This is the map of international laser ranging network stations that collected the LAGEOS satellite data, which were used for this experiment. Click on image to enlarge. Credit: International Laser Ranging Service, Central Bureau/NASA.

Data from NASA's Gravity Recovery and Climate Experiment (GRACE) mission allowed for a vast improvement in the accuracy of new models, which made this new result possible. The measurements required the use of an extremely accurate model of the Earth's gravitational field, called EIGEN-GRACE02S, which became available only recently, based on an analysis of GRACE data. The model was developed at the GeoForschungs Zentrum Potsdam, Germany, by a group who are co-principal investigators of the GRACE mission along with the Center for Space Research of the University of Texas at Austin.

"We found the plane of the orbits of LAGEOS I and II were shifted about six feet (two meters) per year in the direction of the Earth's rotation," Pavlis said. "Even if the gravitational model errors are off by two or three times the officially quoted values, our measurement is still accurate to 10 percent or better."

The team analyzed an 11-year period of laser ranging data from the LAGEOS satellites from 1993 to 2003, using a method devised by Ciufolini a decade ago. The new research around Earth is the first direct measurement of this phenomenon at the five to 10 percent level. It has recently been observed around distant celestial objects with intense gravitational fields, such as black holes and neutron stars.

LAGEOS II, launched in 1992, and LAGEOS I, launched in 1976, are passive satellites dedicated exclusively to laser ranging. Round-trip travel time of laser pulses sent to the satellite from ranging stations on Earth are recorded, enabling scientists to precisely determine the distances between the Earth stations and the satellites. Another NASA mission, Gravity Probe B GP-B), will also make a measurement of the frame-dragging (Lense-Thirring) effect, although with ten times better accuracy than the current LAGEOS result.  It will also provide the most accurate measure to date of the warpage of space-time caused by the Earth's mass.

It is space that twists, warps and vortexes itself.
Nothing else does this to space.
Add dozens of erroneous assumptions like "earth warps space" and it still cannot change the reality, that reality lays "precisely" 180 degrees in the direction, from which they are looking, which "precisely proves" that:
Nothing has been proven if they were looking precisely away, from that, which was claimed to have been proven. RG
Contacts- Einstein was Precisely Backward, Deliberately.
Impossible Correspondence Index