NESTED  CIRCLES,   U-SETTINGS,  AND THE MANY  TRILITHONS.
WHY  WAS  STONEHENGE DESIGNED LIKE  THIS ?

To make progress  it is essential to try to understand what circles, U-shaped settings and trilithons meant symbolically?
The most promising answer to these questions, based on the latest research into ancient peoples and their religions and which accord with all the known facts of science, archaeology and anthropology, are outlined here.

First we emphasise that no complete answer can ever be deduced because the builders, who have been so long dead, left  no literature to guide us.  Nevertheless because the Stonehenge people worked with symbols and integrated symbolic meanings into the stones, scholars have identified enough meanings, using parallels from early agrarian cultures elsewhere, to reconstruct an outline of the lost mythology.  The formulation of these concepts into a coherent and unified theory is due to the physics professor Dr Terence Meaden, an archaeophysicist.


(1)  To commence,  Stonehenge, Avebury and the other stone monuments of Western Europe were built over 4 millennia ago in an era when Neolithic farmers believed in an Earth Mother and a Sky Father.  With this knowledge, scholars in ancient religions, proficient in the interpretation of archaic artforms, see that the ordered stones of Stonehenge could constitute an open-sky temple implicitly dedicated to the worship of the Earth Mother. This is because the monument is heavy with feminine symbolism.  Above all, the several concentric circles and the U-settings appear to represent the womb of the Earth Mother while the middle trilithon arch in the outer circle is her vulva (refer to the plan of Stonehenge given on the previous Stonehenge Building web page).


Hence, it seems that a major purpose of the 35 narrow arches (30 in the outer circle, 5 in the inner great trilithons) is to emphasise still more the femininity of the monument;  and that as with Hindu temples throughout the world  the object of the cult is placed in the womb of the temple at its focal point.  At Stonehenge the Cult Stone has been inaptly called (since the 17th century) the Altar Stone.  It is the biggest of the Welsh stones and, when freshly scraped and wetted, glistens in the sunshine because of its myriads of mica mirrors.


(2)  Next, the axis of the monument is directed at the rising sun on midsummer's day.  It is only on midsummer morning that the rising sun penetrates the middle-arch of the womb to illuminate the internal Goddess Stone with its radiant energy.  Watchers would see the stone sparkling in the reflected light of the Sky God, serving here in his role of the Sun.  This constituted a dramatic spectacle in which the actual Marriage and Consummation of the Gods was witnessed.


Hence the inferred Creation Myth of the Stonehenge and Avebury Peoples is that Earth Mother and Sky Father came together to beget  the world, and that the midsummer spectacle was the anniversary and dramatic re-enactment of the primordial event.
In other words, the ongoing fertility myth could be that by their annual mating God and Goddess guaranteed the success, the safety and the fertility of the people's uncertain world which was forever at risk from sterility, weather, disease and wild animals.   It may reasonably be conjectured that it was much the same at other stone circles throughout the British Isles---wherein the simple circle is also a womb or genital shrine to the Earth Mother---but that Stonehenge and Avebury in England, Maeshowe in Scotland, and Newgrange and Knowth in Ireland were the pinnnacles of the builders' achievements in expressing in stone and light the concept of the Marriage of the Gods, a belief that was certainly widespread throughout the Ancient World in one form or another (for two examples refer to the bottom of this page).


The visitor should also note that at Stonehenge shortly after sunrise a second effect took place --- in fact, it still does. The phallic shadow cast by the Heel Stone (a stone which is arguably the Sky Father's lithic personification on earth) also enters the vulvar arch to encounter the female cult object --- the Womb Stone or Cult Stone.  Hundreds of  believers waiting on the encircling bank could see this spectacle happen to their entire satisfaction.  This is demonstrated in the photograph immediately below which was taken from the point of view of an observer at the Heel Stone.

Visitors to Stonehenge may view this sunrise spectacle from the roadside at  5 a.m. summer time on days when the sun rises bright and clear and casts a sharp shadow.   The best dates are from 18 to 24 June annually.  Come and see for yourself this summer.  (No permission is necessary because you can view this from the roadside.  Try to arrive no later than 4.45 a.m.).
Hence, to put it poetically, the Heel Stone may be considered the Sky God's representative on Earth not only because of this 'manifestation of  his powers'  but because there is a carved head on the stone as well.


A good colour photograph of this head has been reproduced in two books:  (1)  Stonehenge: The Secret of the Solstice  and  (2) Avebury: The Secrets of the Stones.  This photograph will be added to these web pages at a later update.

The next photograph shows another recently-discovered face-carving at Stonehenge, which leads us to pose an unanswerable question:

WHO WAS THE ARCHITECT WHO
PLANNED STONEHENGE?
Although we can never know, one may ask
was it the person whose face is sculptured
into the side of trilithon stone 54 ?
Whoever this was, it must have been an
influential personage to have had facial
features  preserved forever in this fashion.

Modern researchers have puzzled for centuries over the striking stone construction known as Stonehenge. But now researchers have discovered new aspects of the site, including a processional road, that may eventually help unravel some of its mysteries.

There are many theories about why ancient peoples constructed the prehistoric megalithic monument, which is estimated to have been built between 3000 and 1520 B.C. Located outside Salisbury, England, Stonehenge is the focus of ongoing research projects coordinated by English Heritage, a cultural preservation agency.

One of those projects recently uncovered previously hidden sections of an ancient pathway that researchers believe led directly to the site from the Avon River in the nearby town of Amesbury.

Known as the Avenue, the pathway is believed to have been built sometime between 2600 and 2200 B.C., according to English Heritage. Over time, parts of the road were obscured, and a modern road called A344 was built across it, reports LiveScience. The new road has made it almost impossible for researchers to confirm the purpose of the Avenue, according to LiveScience.

In an effort to answer some of these questions, researchers carefully began removing the paved A344. While the banks of the original path had long since eroded away, archaeologists were excited to find traces of two parallel ditches that once ran on either side of the path. These ditches connected segments of the Avenue bisected by A344.

“And here we have it –- the missing piece in the jigsaw," Heather Sebire, properties curator and archaeologist at English Heritage, said in an interview with BBC History Magazine. "It is very exciting to find a piece of physical evidence that officially makes the connection which we were hoping for."

While the purpose of the Avenue is not exactly clear, Sebire told LiveScience she believes it was involved in ancient processions to and from the site.

“It was constructed in 2300 BC so is a later addition to the stone circle, but people would have processed along it to the monument," Sebire told BBC Magazine. “It’s quite a dramatic finding.”

At least one researcher unaffiliated with English Heritage believes  the excavation could help confirm a theory that the Avenue leading to Stonehenge was built along the solstice axis. As archaeologist Mike Parker Pearson told National Geographic, this means that the direction of the Avenue moving away from the monument points toward where the sun rises on the midsummer solstice, the longest day of the year. But if you turn, the path leading back toward Stonehenge points toward where the sun sets on the midwinter solstice, the shortest day of the year.

When was Stonehenge built and by who? - Bradshaw Foundation

Magic circles: walking from Avebury to Stonehenge | Travel | The ...

Path to Stonehenge Discovered, More Than a Mile Long

DIVINE MARRIAGE IN OTHER CULTURES
The concept of Sacred Marriage between an Earth Mother and Sky Father appears to have been quasi-universal, especially in early or primitive agricultural societies.
Very many examples are known worldwide, not only from the vast Indo-European regions but from the Americas, Africa, the Far East and Oceania.  Two non-Indo-European examples are given for introductory purposes.  These are important because the descendants of the believers have explained the meanings to anthropologists.
(1)  A petroglyph carved by the native Americans of  Southern California shows the rays of the Sky Father or Sun entering the womb-like labyrinth of the  Earth Mother. 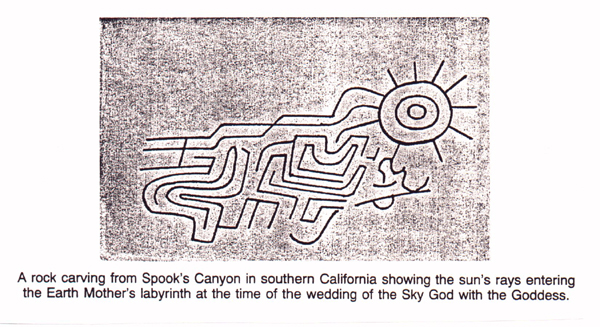 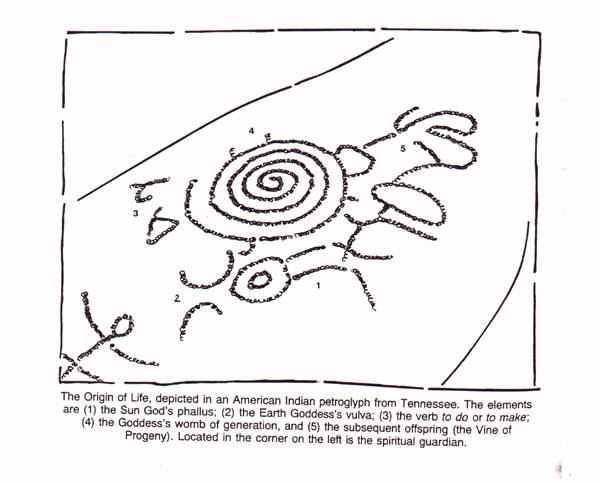 (2)  From Tennessee comes another Indian stone carving which shows the phallus about to enter the yoni of the Earth Mother as a sign and appeal for the fertility of the land and its peoples.